Thematic itinerary n. 4 of the Walk of the Titano

This route is the only non-ring thematic itinerary and develops between the municipalities of Serravalle and Domagnano, with the aim of telling the vicissitudes of the ancient Biancazzurro (whiteblue) train and unifying Ausa Park and Laiala Park.

Starting from the old Dogana station you can reach Serravalle, initially by following the path that the tracks used to occupy, inside Ausa Park, and skirting the stream on the side of Cinque Vie locality, on a new trail, surrounded by trees, countryside and old oaks.

Afterwards, by crossing Laiala Park you will reach Domagnano passing through the ancient way of the railway, already existing and now a pedestrian and cycle path. 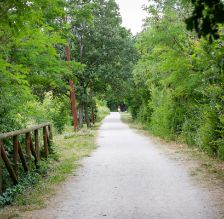 The Walk of the Titano