The walls of this place simply drip history

Where is the Small Church of Saint Peter?

The church is adjacent to the Basilica of Saint Marinus, in Piazzale Domus Plebis, and you can visit it by asking the custodian of the Basilica.
The interior is in neoclassical style and is noteworthy for its gold-decorated dome ceiling. The altar is in polychrome marble and, above it, you can admire the statue of St. Peter by Enrico Saroldi, and the frontal from the ancient parish church.

Tradition attributes the foundation of this small building to Saint Marinus, patron saint of the Republic. Below are two details that link the sacred site to the Patron Saint. Let's have a look at them.

The apse is excavated in the living rock 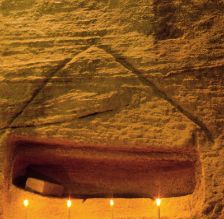