The story of the Palace

The Public Palace of San Marino, also known as the Government Palace, is where the official ceremonies of the Republic of San Marino are held and is the seat of the main institutional and administrative bodies, such as the Captains Regent, the Great and General Council, the Council of the XII and the State Congress.

It is located in the capital of the State, City of San Marino, located on Mount Titano.

The building stands on the site of the Domus Magna Comunis, namely the old palace, dated around the end of the fourteenth century (1380-1392), which despite numerous renovations was torn down towards the end of the nineteenth century.
The new Public Palace was built between 1884 and 1894. It was projected by the Roman architect Francesco Azzurri, who designed it in the severe, simple style of thirteenth and fourteenth century municipal buildings. The first stone was laid on 17 May 1884, while the solemn inauguration ceremony took place on 30 September 1894.
Speaker at the ceremony was the famous poet Giosuè Carducci, who on this occasion delivered the speech "on perpetual freedom".

Local labour was employed for the stone works, under the direction of master builder Giuseppe Reffi, while foreign craftsmen were chosen for the decorations, furnishings and artefacts.
On 30 September 1996, the restoration and restructuring work, directed by architect Gae Aulenti, was completed.

The façade of the of the Public Palace of San Marino is supported by three pointed arches and is characterised by the presence of three large openings and the clock tower.

On the sandstone surface are the coats of arms of illustrious Italian families, while above the arches of the porch we find those of the last four Castelli that were annexed to the ancient Republic : Serravalle, Fiorentino, Faetano and Montegiardino.

On the right of the façade is a bronze statue of the founder of the Republic, Saint Marinus, made in 1894 by the sculptor Giulio Tadolini.
On the clock tower a mosaic triptych depicts Saints Leo, Agatha and Marinus. The battlements of the tower as well as those of the main building were realized in typical Guelph style.

At the centre of the façade is the balcony from which, on 1 April and 1 October each year, the names of the Captains Regent elected for the next half year are announced.
Under the arcade are three large entrance doors and a marble bust, also by Giulio Tadolini, depicting the architect Francesco Azzurri.

The Changing of the Guard

The Uniformed Unit of the Fortress Guard performs its duties at Institutional Seats and performs the service of honour at the Public Palace.
During the summer months visitors can admire the picturesque Changing of the Guard.
The Fortress Guards are easily recognisable by their uniform, with its dark green double-breasted jacket adorned with white and red braiding, red trousers with green stripes, kepì headgear with red pom-pom and white gaiters. The high uniform also involves wearing golden straps and leather helmet with white and red ostrich feathers.

The Great and General Council Room

The Great and General Council Room is used for the parliamentary activity of the Republic. Sixty councillors' desks, designed by Gae Aulenti, are placed in a circle round the room.

On the front wall we see the large tempera depicting the apparition of Saint Marinus to the people done by Emilio Retrosi in 1894. The Saint is represented on the lower slopes of Mount Titano while he delivers his ideal of freedom and independence to the people of San Marino. To the right of the Saint are two Captains Regent (one of whom is Pietro Tonnini) while to the left are depicted representatives of the professions with standards. A child in swaddling clothes is depicted; this is Sady Serafini, the San Marino citizen who would die on the Karst plateau after having enlisted as a volunteer in the Italian Army during the First World War.

Other paintings in the room are the work of Siena painters Pietro Lolli, Giuseppe Rossi and Carlo Merlini. 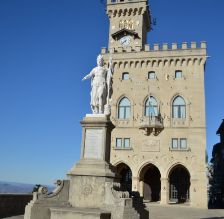 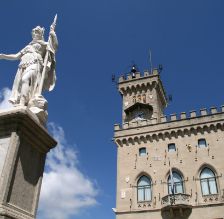 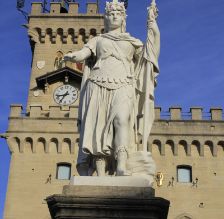 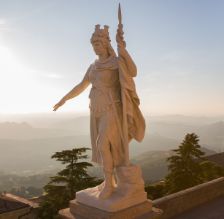 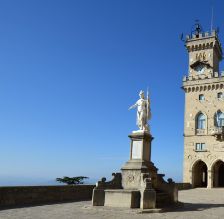 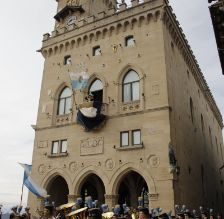 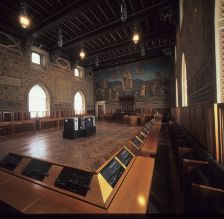 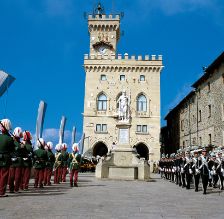 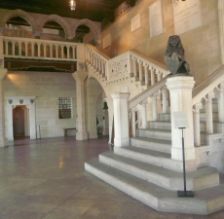 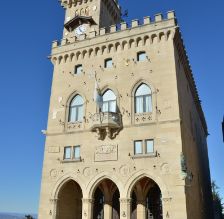 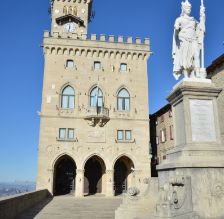 The National Museums include: First Tower, Second Tower, Public Palace, State Museum, St Francis Museum, National Gallery, Stamp and Coin Museum during opening hours to the public. Times may vary, even without notice. It is recommended to contact the Cultural Institutes to check the opening hours.

1st April - Investiture of the Most Excellent Captains Regent